Last week, I was finally able to be a part of something I’ve wanted to experience for a long time- the International Film Festival, Kerala (IFFK). A lot of my friends had praised it to high heaven, so much so that even I (admittedly not much of a film-lover) felt like my life wouldn’t be complete without treading on its grounds even once. 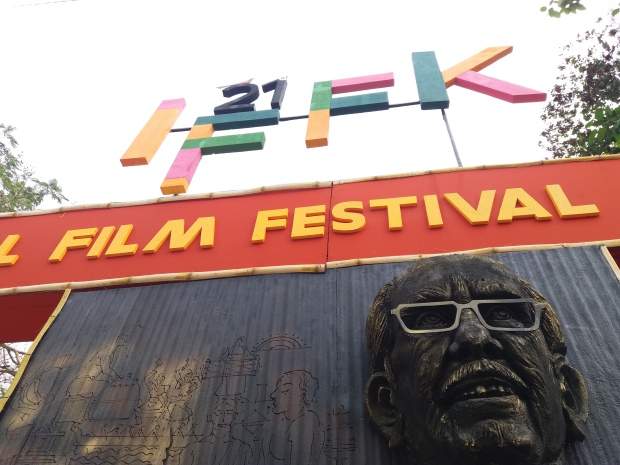 So first, here’s a little something about IFFK. Its like any other film festival out there- a place for like minded people to mingle and cultivate interest in films of different themes and types. There is also a competition segment where the audience can vote for the films that please them the most. 14 screens were engaged for public viewing and about 13,000 people registered as delegates this year. We were asked to pay 300rs (500 for non-students) to register for a pass that would allow us to enter those theaters that hosted this festival. The cost was pretty low considering I’d have to pay at least 90rs to see one film normally- and here I could watch at least 6 films a day for more than a week! We were lucky we registered as soon as news got out, because a lot of my classmates were unable to register as there were no further seats available. 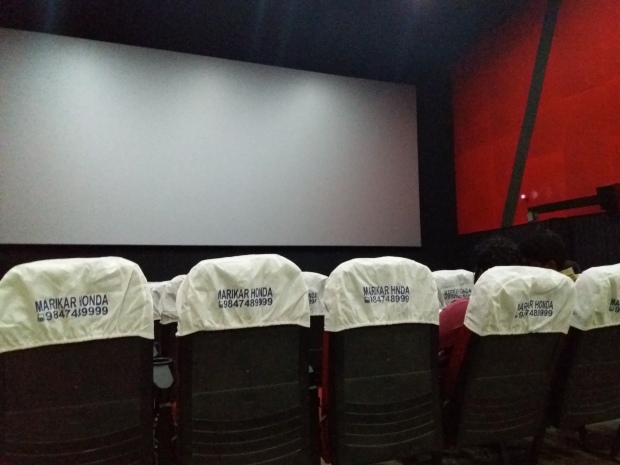 My friends and I collected our ‘IFFK kit’ at a later date, which included all these handy items:-

A tote bag, a book of all the films that will be shown, a schedule and an ID!

The fest began on 9th this month, and we kick started our adventure with Being 17 (Quand on a 17 ans) a film that spoke of issues like bullying and sexual awakening so beautifully that our normally rowdy group watched it in perfect silence. We had to stand in line for over an hour, and managed to just make it before the full capacity of the theater was reached. The male nudity in the film, though essential to the plot, slightly shocked us all, because we weren’t used to seeing everything so blatantly onscreen. Yet the film had us looking forward to everything that was to come!

Sometimes the directors themselves came to offer a ‘hello’

After that, I watched ‘The Bribe of Heaven’ (El Soborno Del Cielo), ‘Les Ogres’, ‘White Sun’ (Seto Sury), ‘Zoology’ (Zoologiya), ‘Sieranevada’, ‘ All is Forgiven’ (Tout est pardonne),’ After the storm’ (Umi Yori Mo mada Fukaku), ‘The Cursed Ones’, ‘Ka Bodyscapes’, ‘The Age of Shadows’ , ‘Clair Obscure’, ‘The Fireman’s Ball’, ‘Take my Home’, ‘Soul on a String’ (Pi sheng shang de hun), ‘Die Beautiful’ and finally ‘Illegitimate’ (Ilegitim). A few I saw alone, most I saw with friends. We raced to reserve the films we wanted to watch as soon as reservation facilities were updated in the app, failing which we arrived more than an hour early to those theaters and stood in insanely long queues under the sun just for a chance to get seats.

People were always on their phones until the movie started!

Of these, Clair Obscure, Die Beautiful, Zoology and The Age of Shadows were my favourites, followed closely by Being 17 and Bribe of Heaven. I found myself crying during Clair Obscure, because the film showed two of the things I fear most about the future- being stuck in a one-sided marriage and being forced to marry someone I can’t stand. The film didn’t shy away from scenes of intimacy, so at times I felt very awkward watching it while sitting between my two male friends. But I soon eased into it- the film was too beautiful for me to think about anything else. Die Beautiful didn’t make me cry, but it presented me with a heaviness in my heart took a long time to lighten. We had reached the theater at seven thirty in order to guarantee our seats (the premiere was at 9 15) and every aching minute was worth it and more. Zoology was wonderful because of the double layered story- the amusing tale of a woman who grew a tail and the harrowing truth that the world cannot accept differences. The Age of Shadows was endearing because of the ever-evolving characters, the multitude of plot twists and the incredible story.

Thanks to IFFK, I was also able to watch Ka Bodyscapes, an Indian film that has been otherwise banned in India because it ‘hurt religious sentiments’. It traced the story of an openly homosexual artist and his beau, and the trials they have to face in our deeply controlling society. There was also a side story concerning a brave female lead (seldom seen in commercial movies- a rare breed, I am ashamed to admit) and how she fights against her erring workplace at the cost of her own family’s support. Though the messages hit close to home, the story in my opinion seemed a little rushed to put-together. The characters were lovably flawed, the camera work was also quite pleasing. 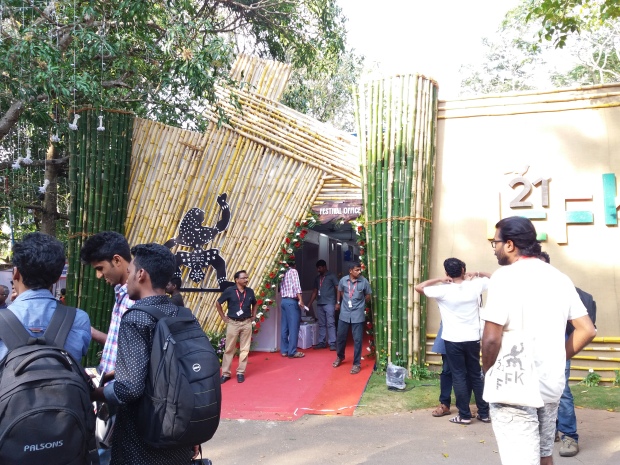 Other than the films, IFFK gave me a platform to view many different kinds of people. It was a place of no judgement, so people could do as they pleased. They dressed in a way so as to reflect their personality, and walked with their head held high and back straight. So many people with naturally curly hair and pseudo-afros who came au naturale, so many delightful women with shaved heads and tattooed bodies. I wish to one day obtain the same amount of confidence.

I also had another side benefit for attending IFFK- since we left home early in the morning it was necessary to have food outside, and I was able to taste (and compare) foods from various restaurants. If we had reserved a film and thus had some time to waste, we window-shopped. And I was finally able to fulfill my wish of seeing a film by myself at a theater (Strict family didn’t take well to the idea, but they had no choice now!)

IFFK was for me a brilliant experience, something that allowed me to broaden my view. It strengthened friendships, fed my opinions and gave me a whiff of independence, after having to sometimes navigate on my own from theater to theater- a big achievement with someone as directionally challenged as me. There were special IFFK auto rickshaws available which took us to other theaters free of cost, but they were few in number and spotting one empty was like spotting a double rainbow. Nevertheless, I could ride it a few times, and each time I shared it with strangers and parted with them as friends. The films gave me and my friends a slight dose of maturity- by the end of the festival we were no longer flustered teens who giggled at nudity and instead learned to recognize the meaning behind such shots. 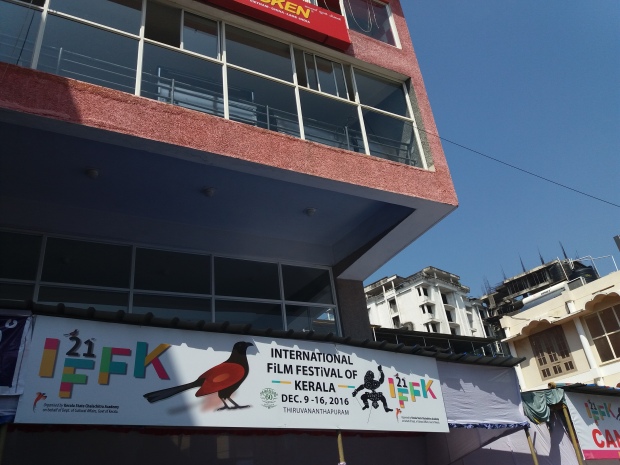 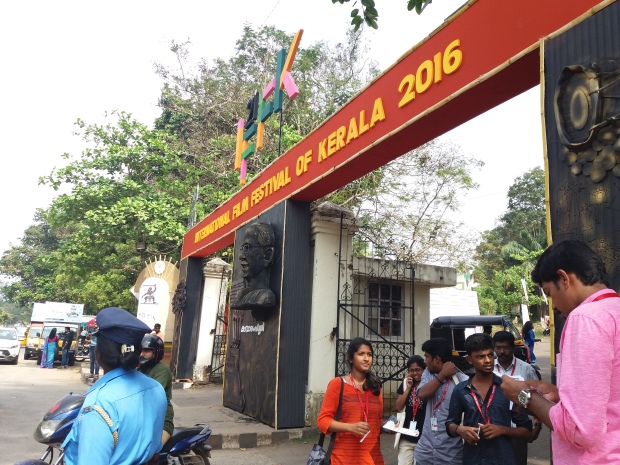 I still don’t regret ‘cutting important classes to watch films’- as my family eloquently put it. I firmly believe that most of these films taught me more about the world than the same amount of time spent lazily inside the four concrete walls of the classroom.

And this was about an hour before the film!

3 thoughts on “My IFFK Experience <”

© Unauthorized use and/or duplication of this material without permission from this site’s author and owner is strictly prohibited. Excerpts and links may be used, provided that full and clear credit is given to dorkyglassesblog with appropriate and specific direction to the original content.

Sela is not your typical business theme. Vibrant, bold, and clean, with lots of space for large images, it’s a perfect canvas to tell your company’s story.
Sela is responsive, which means it adapts to any screen, providing your visitors with a great browsing experience on any device.